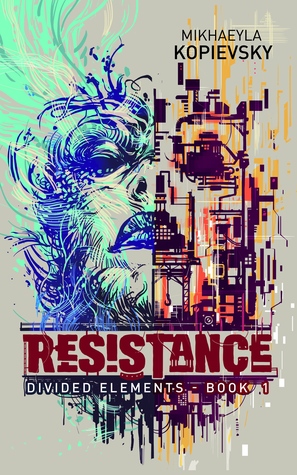 In the post-apocalyptic city of Otpor, where your identity is determined by the government and your personality conditioned from early childhood, only one crime is punishable by death – free-thinking.

Anaiya, a Peacekeeper of the uncompromising Fire Element, lives to protect and maintain the Orthodoxy – the state’s dominant ideology and social contract. For decades, Otpor has flourished under its strict enforcement, providing citizens with full employment, universal housing and healthcare, and abundant alcohol, drugs and entertainment.
But not everyone is satisfied in this veritable utopia.
When forbidden murals appear on concrete walls calling for Resistance, Otpor’s carefully maintained stability begins to shatter. To reverse the chaos and restore balance, Anaiya undergoes radical and untested technology to realign her identity and allow her to infiltrate the rebellious Air Element.
But seeing things from the other side has its complications. As concepts of loyalty and obedience fracture and betrayals escalate, Anaiya is faced with an impossible decision. Torn between two worlds and two identities, Anaiya must choose a side before the Resistance and its Heterodoxy infects them all.

This website uses cookies to improve your experience while you navigate through the website. Out of these cookies, the cookies that are categorized as necessary are stored on your browser as they are as essential for the working of basic functionalities of the website. We also use third-party cookies that help us analyze and understand how you use this website. These cookies will be stored in your browser only with your consent. You also have the option to opt-out of these cookies. But opting out of some of these cookies may have an effect on your browsing experience.
Necessary Sempre abilitato
Necessary cookies are absolutely essential for the website to function properly. This category only includes cookies that ensures basic functionalities and security features of the website. These cookies do not store any personal information.
ACCETTA E SALVA
%d blogger hanno fatto clic su Mi Piace per questo: